Imago Foundation for the Arts (IFA) will feature artwork by IFA artist Betty Harrington and guest artists Deb Ehrens and Jesse Thompson as part of a group exhibit June 14 through July 22 at IMAGO Gallery, 36 Market Street, Warren. The public is invited to a free reception on Friday, June 15 from 6 – 8 p.m. 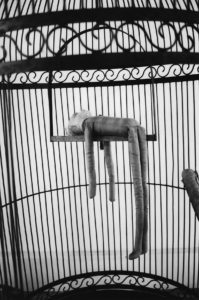 Harrington will present recent artworks, completed in a variety of black and white media, which she calls, “BLACKGREYWHITE.” She says, “I have always loved the infinite range of marks, textures, and tones made possible by rubbing charcoal across a piece of blank white paper. This thought led me to the decision that a mix of recent artworks could be viewed as my interpretation of ‘drawing’ on a blank gallery wall.”

An interdisciplinary artist whose work has been shown throughout the northeast, Harrington is a founding IFA member.  She started painting in 1961 and was self-taught until moving to Rhode Island in 1972, where she started taking continuing education classes at the Rhode Island School of Design (RISD). She graduated from the Resumed Undergraduate Education Program at Brown University in 1992 and has been a full-time artist ever since. 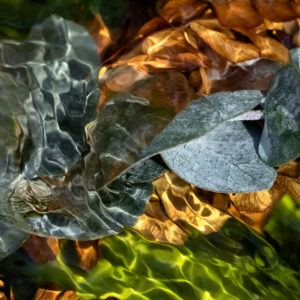 For Ehrens, what began as a childhood fascination with the painted flowers on her grandmother’s china has become a lifelong love of botanical imagery. Her artwork for this exhibit, which she calls “Adrift,” consists of still life photographs of plant ephemera she placed in the ripples and small rapids of woodland streams, creating imagery that is lyrical and contemplative.

She learned the basics of black-and-white photography as an adjunct to her early career as a journalist, and more recently has studied with Harold Ross, Dan Burkholder, Alison Shaw, Ron Wilson, and taken classes at RISD and Maine Media College. Ehrens is a juried artist member of the Cape Cod Art Center and exhibiting member of the Providence Center for Photographic Arts.

Thompson will exhibit an eight-foot long panel drawing called “Fruit Sellers,” based on the intricate fruit and vegetable stand set up by W.C. Fruits & More along Westminster Street in Providence, RI, just outside Joe’s Meat Market. The fruit shop appeared to him as an elaborate and dynamic still life set up. Some days he would sit and draw the shop, hoping to represent not an accurate, but an emotionally accurate sense of the overwhelmingly interesting and beautiful experience of shopping at and looking at the fruits and vegetable stand.

Originally from New Jersey, Thompson graduated from RISD’s Masters in Sculpture Program in 2007, and established a studio in Providence for a decade, where he made his sculptures, paintings, and drawings. Since moving to Singapore, he has been teaching drawing, illustration, anatomy and animation at The Nanyang Technological University’s Art Media and Design school and developing new directions in his art-making practice.

The Imago Foundation for the Arts (IFA) supports community involvement in a wide range of cultural activities related to the arts. Visit www.imagofoundation4art.org to learn more about IFA and its mission.